Morning guys. This is our first family interview! First-up: can you both tell us a bit about yourself?

Shelley: Hello, I’m 44. I was born on this magical spot my parents found, some 50 years ago, and now live here with my husband and two kids. Our house is one giant art making space. I make handmade tableware.

Michael: I’m 77 years old now, left school in 1960 at 15, and began work in advertising — leaving employment in 1970. I had no plan. I just thought I would find something creative to make my living and create a lifestyle. 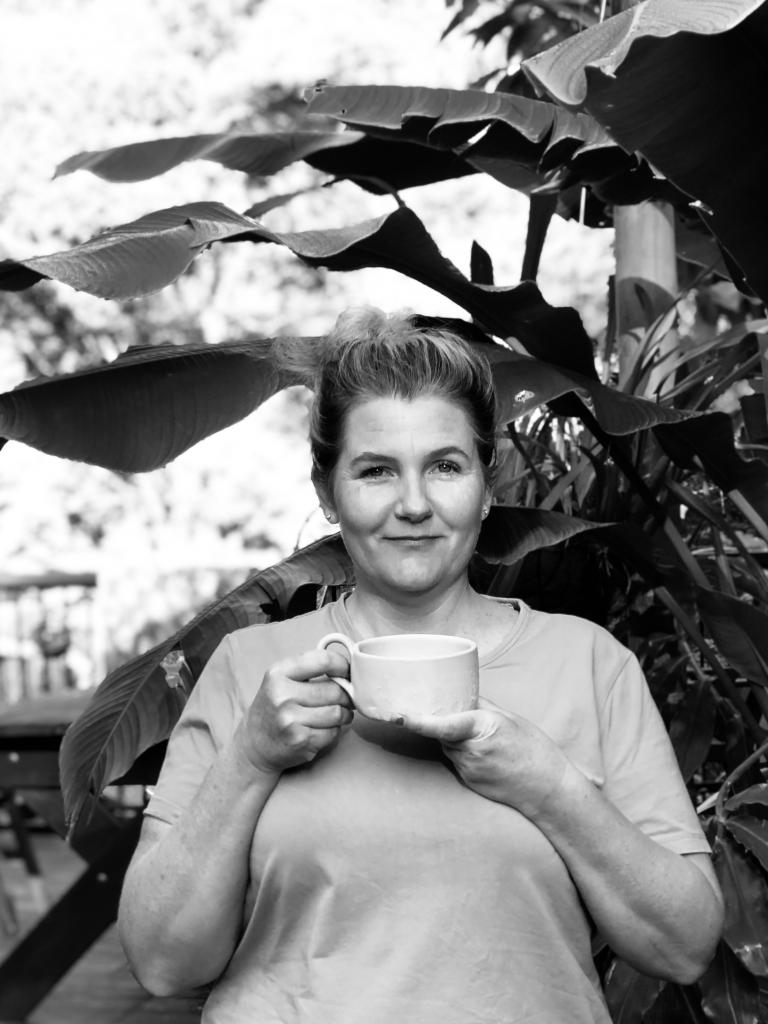 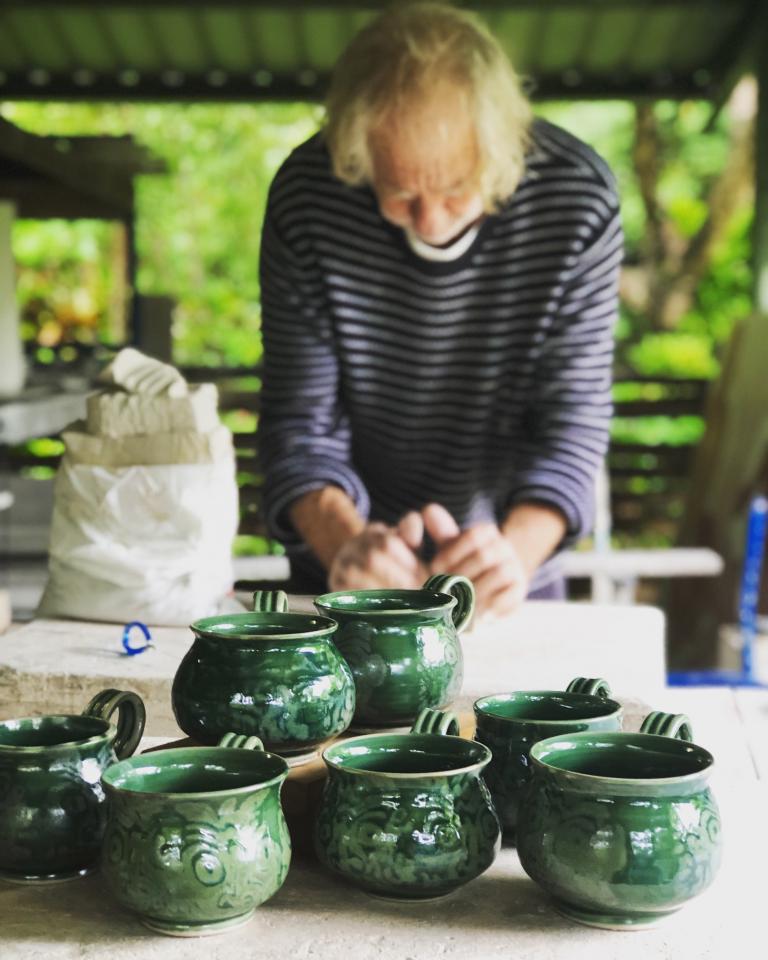 I’m keen to hear how you got into ceramics, Michael?

Michael: We came to Buderim in 1971 where my wife and I set up our pottery studio. We had many books on pottery. Some described the history of studio potters in Korea, Japan, and china —they described the true nature of the studio potter. We also had books which showed us how to build wood fired kilns, make glazes and all the general information needed to fulfill the process. 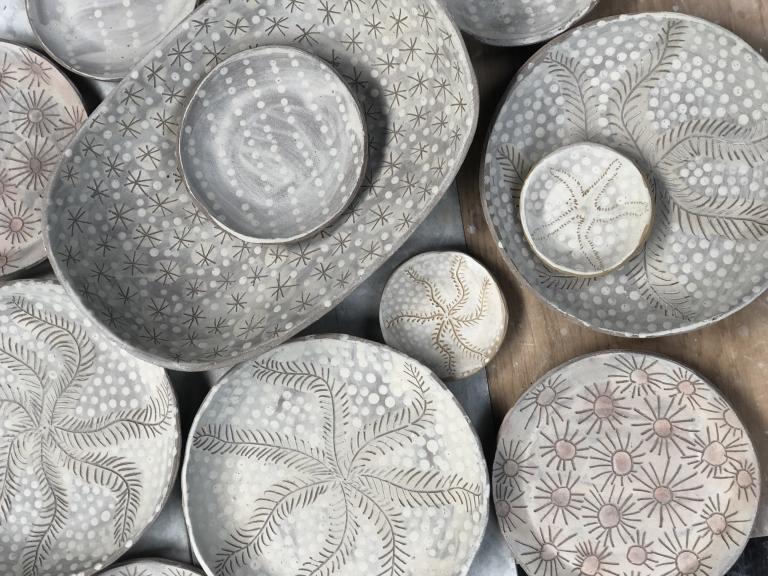 Did your dad have an influence on your decision to go down a similar path, Shelley?

Shelley: Both of my folks have always been artists. Their homes also merged into studios and my sisters and I were raised with a paint brush in hand. Conversations were always about art, music, literature, and film. The lunch table was always a revolving centre for discussion and a meeting place for fellow creatives passing through. I have always loved painting and admired my mother’s practice of abstract expressionism however my love of ceramics was the greatest pull. My mother Janney was always exposing me to South East Asian ceramics, which I found fascinating. Also, Celadons, PNG pottery, Cycladic sculpture, Picasso’s ceramics and artists like Maria Gazard. I find my pottery ideas bubble out like a fountain. I never have time to form them all!

I feel like people either go one of two ways — they follow in their parent’s footsteps, or they do the opposite. Shelley, what was it that drew you down a similar path to your dad?

Shelley: After high school I travelled to Melbourne and studied Visual Arts at Swinburne on Chapel Street, Prahran. It was a melting pot of people, culture, arts practice and ideas. I loved my time there and got to explore many techniques and forms. After that I travelled to NYC and toyed with the idea to stay, but sadly woke up to September 11 one morning and hot footed it back to Buderim. I found a compelling sense of comfort and pleasure in the potters life. Ideas flowed, work sold, and so it began. 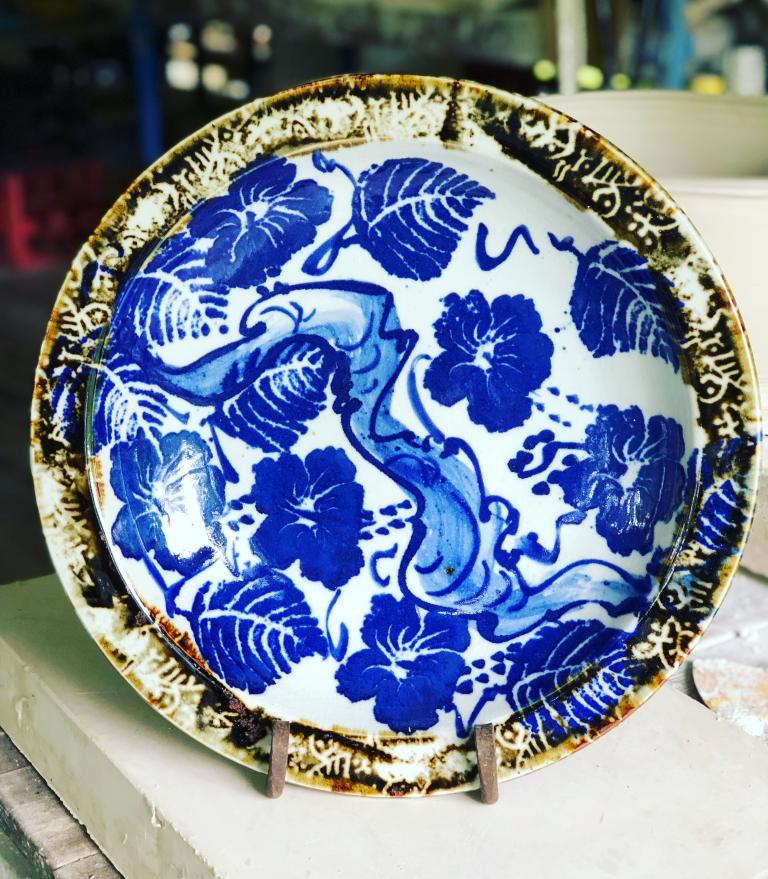 It must be so special to share a studio and be so close to each other. What are some of the moments — that you might not initially realise — that make it so special?

Michael: Sharing a studio space was not something we set out to do — it more or less grew slowly over the years to become what it is today. We both share everything in the studio in a harmonious way.

Shelley: I absolutely love to work in my dad’s studio space. Dad is a brilliant teacher and so patient and generous with his time. He never pushes or complains. We always have a great time and I love his company. I recently built my own space to make in which is important for me to grow, juggle parenting and work in. But I still use dad’s kilns. Lately, I’ve been focused on refining firing the kilns and controlling atmosphere and temperatures. Dad and I can kick back with a glass of red and chew the fat as we wait for the kiln to get to temperature. I find myself wanting to soak up his wealth of information. He’s a living treasure of ceramics!

Michael: I particularly like Shelley’s inspiration and her ability to use that in her work expression so that her pots, to me, look very much a part of her.

And now over to you, Shelley. What do you like about your dad’s work?

Shelley: I admire how dad takes the clay and transforms it into an extension of himself. He has such intuitive practice. He creates his canvas and he imbues it with his persona. You can always recognise dads work. I feel like his soul shines through each piece. From tea bowl, to blossom jar, you know its one of his babies. No one can ever successfully copy dads work because he has travelled a long road to get there. He’s like a runner who’s trained for a marathon. Dads always had such focus and determination. Up at dawn, always making, always learning, and always humble. What inspires you both?

Michael: Nature is my inspiration. Also time spent working in Asia has added to the mix.

Shelley: Oh snap! Yes, I would say Mother Nature is my greatest influence too! I love objects and patterns from the ocean, the rainforest, and the sky. Design is so abstract and sublime. It’s everywhere you look — in crab nests at the beach, tidal patterns, clouds in the sky, or vines in the rainforest. I love the boulders at Point Cartwright riddled with pits and channels. In terms of ceramics I love Asian design and simplicity. I have family in Mashiko, Japan and I’ve always admired their philosophy and approach to craftsmanship. Some of my first gifts of pottery tea bowls came from my aunt and uncle in small cherry wood boxes, wrapped in hand made cloth. They were so special. 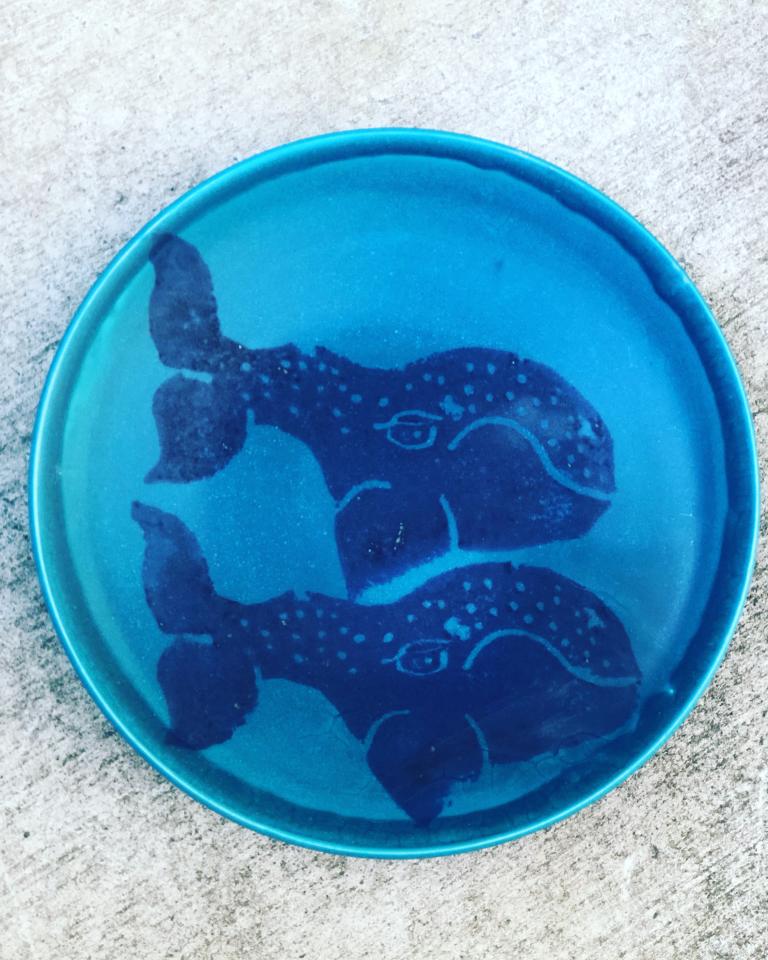 Michael, was there a defining moment in your life that made you realise you were on the right path?

Michael: When I decided to leave my job, and strike out on my own, believing there was much to be gained by self employment and the lifestyle. The foundation for all this was an optimistic notion that all would be well and I’m living an adventure.

You are both at different stages in your life. Michael, what advice have you got for your daughter in terms of a work-life balance?

Michael: From what I observe, I see Shelley as striking that balance in her work and her family life. There is nothing that would prompt me to give her advice.

What’s the most meaningful advice your dad has given you, Shelley?

Shelley: To never give up. Disappointment happens often with pottery so you have to put it down to a learning curve and go again. My father also taught me to work hard — to start early and give your day all you’ve got. Nothing ever comes easy and success is the reward for your effort. And when you open the kiln door to a beautiful firing, its so satisfying. 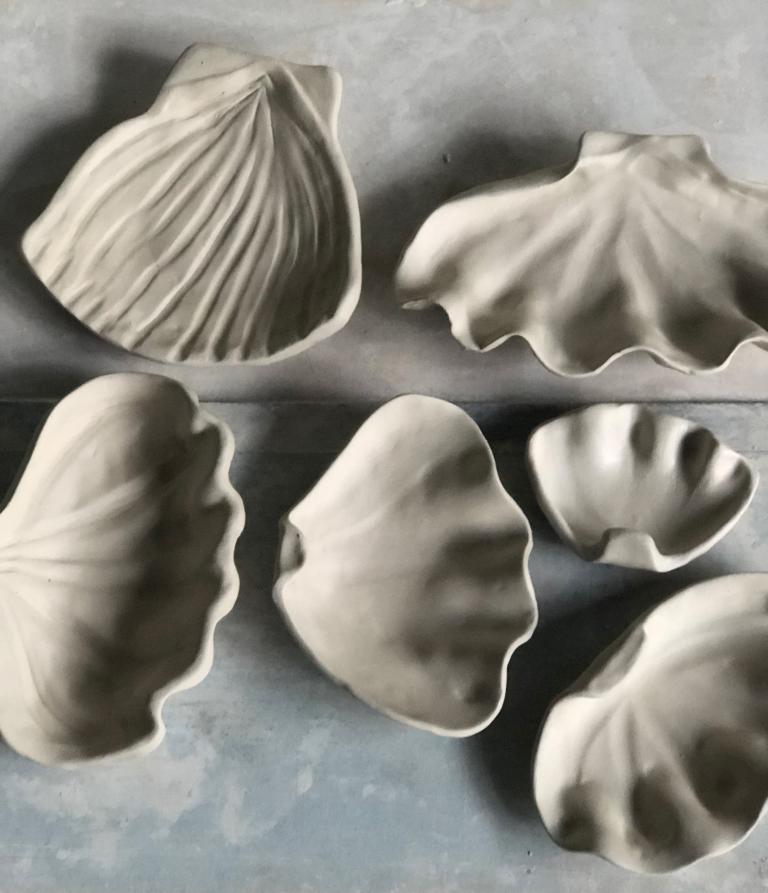 Michael, can you tell us something Shelley doesn’t know about you?

Michael: At my age now and after spending so much time with Shelley and all my family, I see myself as fairly translucent. I can’t think of anything that Shelley does not know about me. 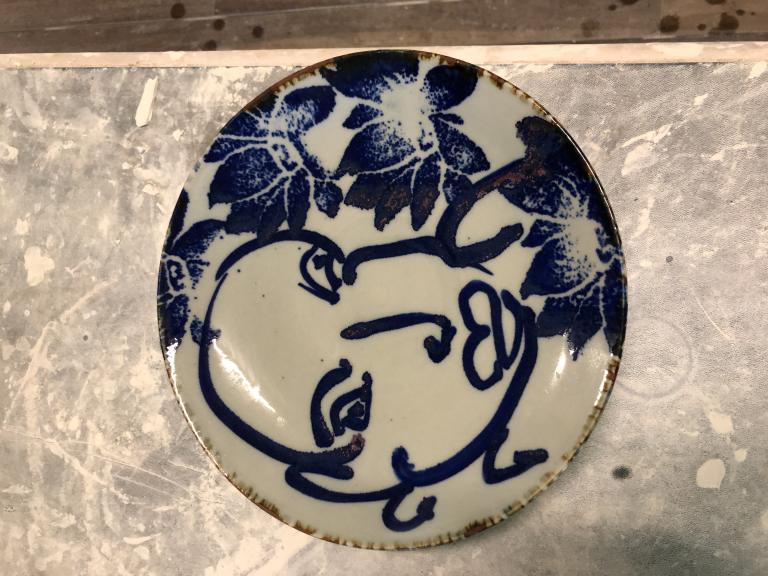 What’s a perfect day for you both?

Michael: Throwing pots on the wheel, I find very therapeutic. Glazing and decorating is inspiring and uplifting. Firing the kiln is the final stage and has a profundity of sealing the fate of the new work. These activities make a perfect day for me.

Shelley: The perfect day in the studio is actually around this time of year. Sunny, not too hot, light breeze, no interruptions and some good music playing. 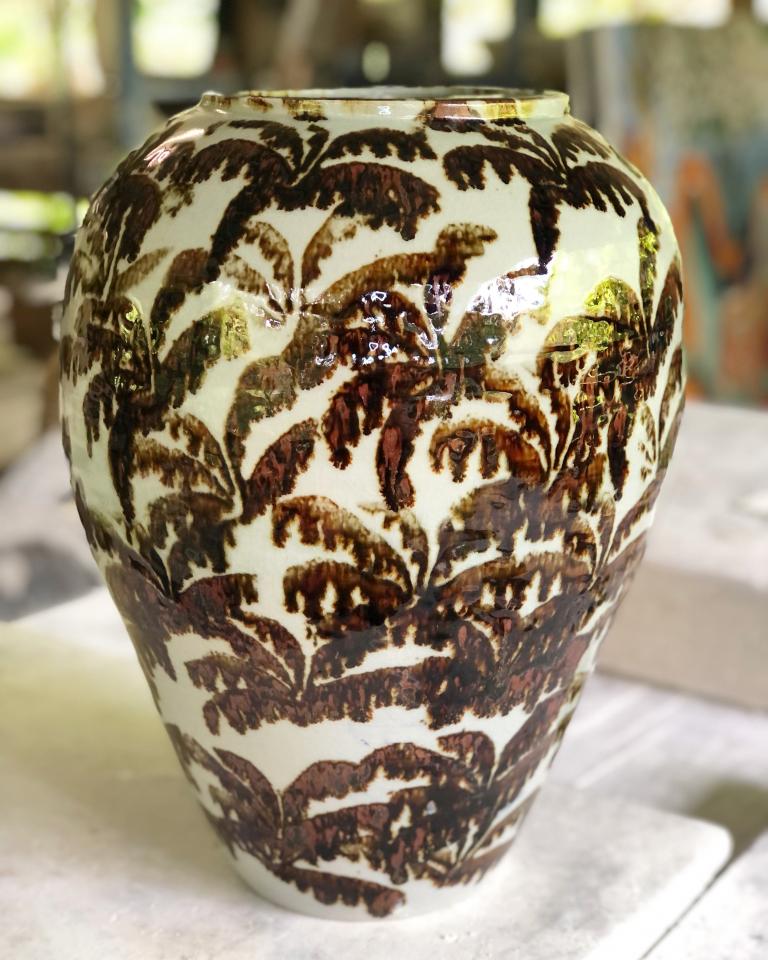 Michael: A laksa by my son in law, Simon
Shelley: Fresh figs from Wises Farm in a salad with parmesan and balsamic dressing

Favourite artist on the coast? 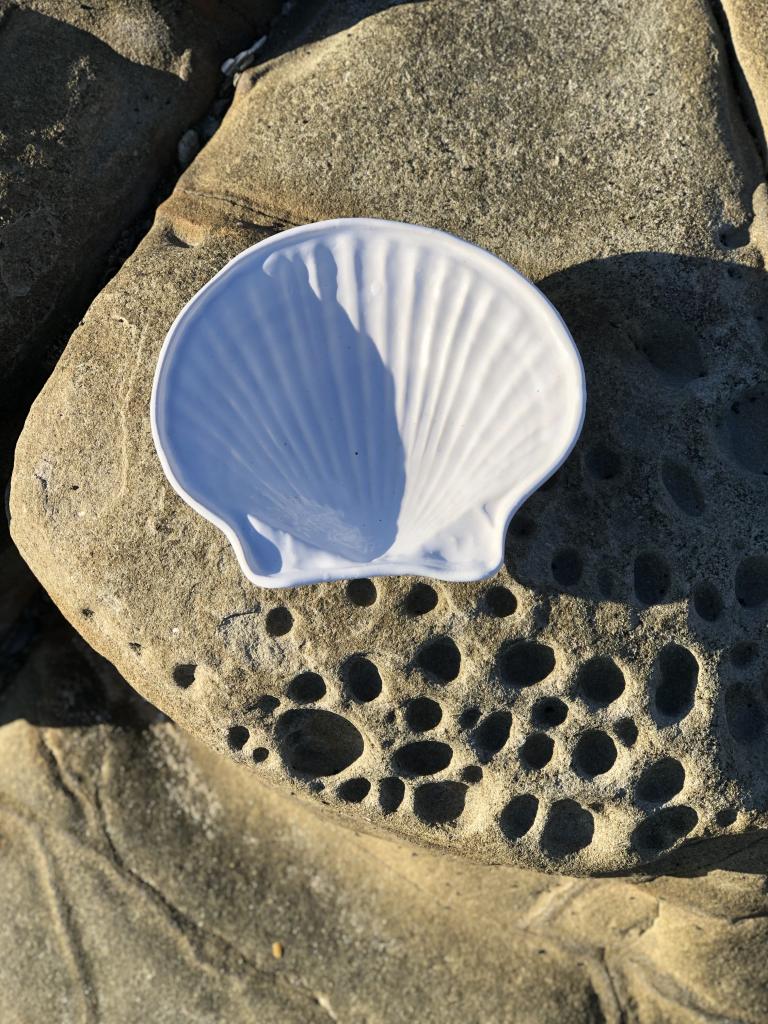 And finally, what’s next for you both?

Michael: I don’t see myself in past present or future. Its all about the journey which began in 1970 and I still continue to walk that path today.

Shelley: This year id like to spend more time on bespoke dinner sets and more dinner parties to showcase them! I love cooking for friends and family and taking pleasure in these moments. Good food, good wine and good conversation and a good plate to eat off!